Thousands of spectators have witnessed the sheer professionalism, skill and prowess demonstrated by young girls and boys at the Danone Nations Cup World Finals, held today at the RCD Espanyol Stadium in Barcelona. 56 teams composed of 700 girls and boys donned their jerseys to represent 27 countries at a global level. The Danone Nations Cup ambassadors Carles Puyol and Amanda Dlamini were equally blown away by the level of sporting excellence demonstrated by the players on the pitch. Furthermore, an iconic “Match of Legends” was held where sporting stars from LaLiga including Morientes, Albeda and Capdevilla scored a total of 10 goals.

The champions from the Danone Nations Cup are Spain for the 2019 girls’ cup and Mexico for the 2019 boys’ cup. France girls’ team will bring the 2018 trophy back to their country and Brazil came out top for the 2018 boy’s cup! These extraordinary players join the Hall of Fame of the world’s biggest football tournament for girls and boys aged 10-12, one that has also acted as a springboard for household names including Giovani dos Santos and Alexandre Lacazette.
The road to Barcelona has been one full of excitement, dedication and commitment for our young players. With great sporting prowess comes great responsibility as they have participated in heats at a national level to win the chance to represent their country at the Danone Nations Cup World Finals in Barcelona. This year, they went even further together with the Danone Nations Cup to showcase how sports can be a force for positive societal change through a series of initiatives that are linked to a noble cause – providing access to safe drinking water in schools, notably through a partnership with Watering Minds Foundation.
The Danone Nations Cup believes in excellence in sport and key values such as respect, fair play and team work. As such, each captain signs a fair play charter and we’re proud to announce that England has taken home all four of the Fair Play trophies for 2018 and 2019 respectively, a testament that values do pay off!

“The passion and commitment of kids from all over the world, gathered in one place, is what makes the Danone Nations Cup a truly unique event and a testimony of how excellence in sport can empower this new generation of young citizens to build a better future. Supporting them on eating and drinking habits that are good for their health and for the planet, we are proud, at Danone, to encourage more children to become catalysts for change around them”, said Emmanuel Faber, Chairman & CEO of Danone.

Carles Puyol, the Danone Nations Cup global ambassador said “What a fantastic day at the Danone Nations Cup in a city that I’m fortunate enough to call home, Barcelona! We’ve witnessed some of the best young sporting talent play at an internationally-known stadium. We’ve seen the dedication that each and every one has put into the game. Most importantly, we’ve observed how children from different walks of life unite together with one key passion: football. I’m delighted to have been part of the Danone Nations Cup and am proud to be part of this tournament that fosters values such as fair play, respect and making the world a better place.”

A life-changing experience empowering kids to build a better future together
Meeting cultures and traditions from all corners of the globe, the Danone Nations Cup players have been educated throughout the tournament on the importance of healthy hydration and nutrition habits as well as on how to protect the planet’s resources.
The Danone Nations Cup selected access to safe drinking water as its key cause to support throughout this year’s tournament. Working with partners such as the Watering Minds Foundation as well as Nobel Peace Prize laureate and social business leader Pr. Muhammad Yunus, the Danone Nations Cup has to date provided funding to support projects for safe access to water for 30,000 children in schools in India. A number of challenges have also been carried out including the Change The Game challenge, which was won by Argentina and Germany for even more projects to be supported. 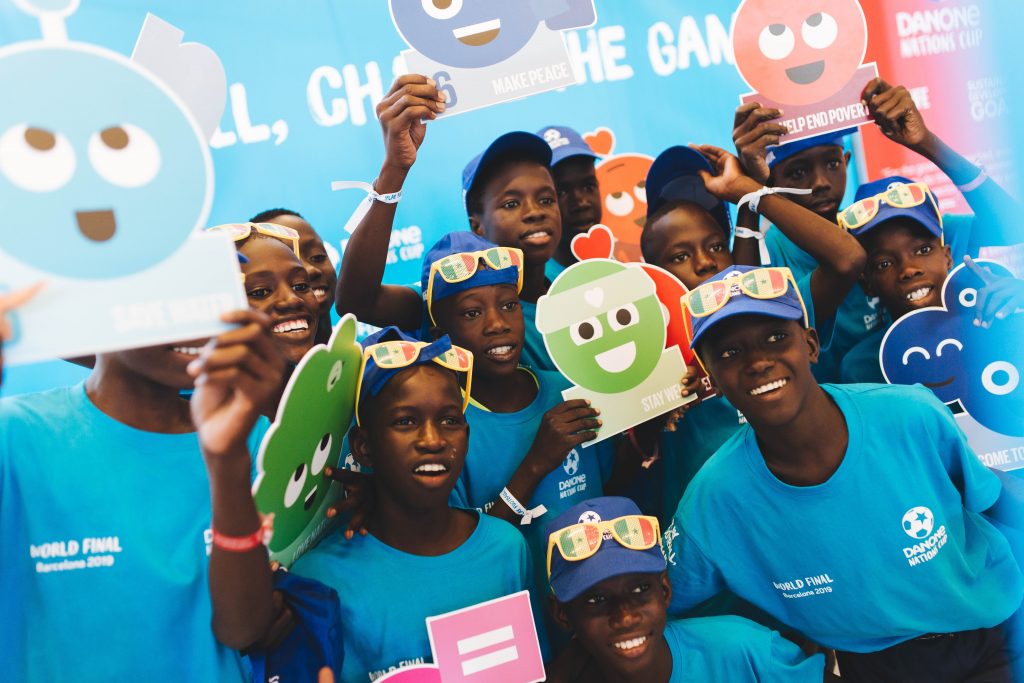 The information you provide to us is processed by Danone SA – and our partner Google LLC, subject to your consent – for the purpose of analyzing statistics on user interaction with the website.